The Eye, The Heart, The Word (Susan Moon & Her Students at Manzanita Village)


"This booklet was born at Manzanita Village, a retreat center in wild country in Southern California. The old ranch stead, set in rugged dry hills, looks like the set of a Western movie, with the added bonus of an adobe meditation hall. [...]

All of these pieces are engaging in themselves, and they also illustrate the way I teach, using prompts and suggestions that I have found to be helpful in encouraging creativity and drawing forth our authentic and surprising stories. We already have everything we need in order to write; we have been doing the research on what it means to be a human being ever since we were born.

For one weekend, seven of us cheered each other on—to look with our eyes both within and without, to let our own words come forth out of silence, and to speak from the heart."

(From the "Introduction" by Susan Moon)

Available for purchase from DUENDE Books. 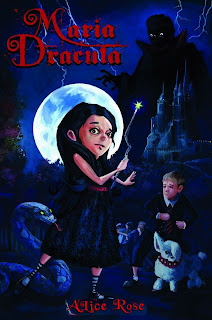 In this coming-of-age fairy tale, a witch apprentice from Salem discovers that she is the great-granddaughter of Dracula from Transylvania – Maria Dracula - and, with his help, she battles a cruel regime and frees his fantastic country, Rondelia.

"Maria Dracula is truly an imaginative story. It has - just about - every magical exercise devised. Well-written, the narrative speeds along from one conflict to another. Somewhat gruesome in spots, a young student who hunkers down with the book will find action galore and a satisfying ending - with clues to a sequel. . . . Each chapter is fronted by a lovely ink-sketched illustration."

(1992 judge for the Golden Kite Award, reviewing more than 700 juvenile books; 1984 reviewer of children's books for the School Library Journal; reviewer for the Society of Children’s Books Writers & Illustrators)

This is a revised second edition, 2007. (The first edition was published in 2005 by iUniverse, in the Editor's Choice Series.)

A member of the Authors Guild of America, Alice is the author of a monograph on Romanian arts, popular culture, and everyday life, Fragmented Identities published by Lexington Books/Rowman & Littlefield, 2003, 2007. In June 2005, the actors of the Fountain Theater in Los Angeles read scenes from her surrealist/absurdist play, Voyage to the Moon. Alice has also published in the U.S. her father's child Holocaust memoir The Violinist (see below).

Angela Ursillo, whose work can be seen in the movies Lord of the Rings and King Kong, signs the illustrations and book cover.

A previous version of Maria Dracula is a finalist in ForeWord Magazine's 2005 Book of the Year Award contest, in juvenile fiction.

In 2007 Maria Dracula is published in Romania by one of the most prestigious publishers of children's literature and textbooks, Editura Didactica si Pedagogica from Bucharest.

Maria Dracula features as compulsory reading in the Syllabus for the English class at Milwood Elementary School in Kalamazoo, Michigan.

Maria Dracula featured in the February 9, 2006 issue of The New York Review of Books.

Maria Dracula was on display at BookExpo America, the largest book publishing event in America, in Washington, D.C., May 19-21 2006.

Maria Dracula was on display at the Frankfurt Book Fair, Frankfurt, Germany, October 4-8, 2006.

Maria Dracula is a registered trademark with the United States Patents and Trademarks Office.

This is the second, revised edition, published on July 15, 2007. The first edition was published in 2005 by iUniverse.

In Giancarlo Covella's poems love and life are the themes par excellence. The seasons change, but things are always the same. Love appears and disappears. Pain always stands. Distant echoes come and go. Silence reigns over everything. Sources of worry are constant. Consistency gets lost. All hopes end.

(Available through orders only from DUENDE Books) 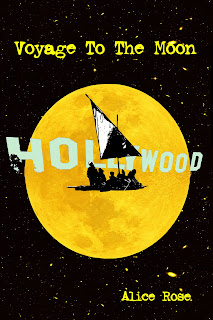 THE VIOLINIST by Calmo Rose 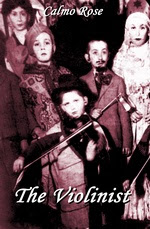 MEMOIR/HISTORY
THE VIOLINIST counterpoises the universe of childhood on a background of the Jewish Holocaust in Romania. It tells the story of Calmo (Lică), whose family is banned from Bucharest due to their Jewishness, as he bears witness to a world that has lost its humanity during the Second World War. In it he falls in love with a pianist, a Jewish girl named Luţa; he also recounts how his own artistry playing the violin charms both enemies and friends, Romanians, Germans, and Jews. Lică’s violin is today transformed into the author's pen, remastering these early experiences with maturity, yet somehow maintaining a tragic innocence. With its cinematographic narrative that blends humor with tragedy and love with music, THE VIOLINIST easily reminds one of Roberto Benigni’s LIFE IS BEAUTIFUL and Roman Polanski’s THE PIANIST.

“The story is terrifying, touching, and in places also very funny.”
Robert Melson, False Papers: Deception and Survival in the Holocaust

Calmo Rose is a Bucharest-based journalist and writer, author of more than twenty books on various social, cultural, ethical, and international themes—some of which have been translated into several languages.